Najaf, Iraq - They converged from four mid-Euphrates governorates to the holy city of Najaf, each loaded with sometimes wildly differing views on how to fix the ills of Iraq. They debated and argued, but there was no doubt the participants in the “Iraq: Youth and Coexistence” forum in Najaf on 18 March 2017 were unison in their quest to influence their country’s future in the period after the defeat of the terrorist Daesh.

A total of 115 youth – 69 males and 46 females – in the age group of 18-35 from the mid-Euphrates governorates of Najaf, Karbala, Babel and Qadissiyah participated in the “Iraq: Youth and Coexistence” forum, which the United Nations Assistance Mission for Iraq (UNAMI) organized in collaboration with the Iraqi Al-Amal Association.

The aim of the Najaf forum, the third after similar meetings in Basra in January and Erbil in February, was to give a voice to youth for their crucial role in charting the road to peaceful co-existence in a future Iraq. Other conferences are to follow in the governorates of Diyala, Suleimaniyah, Baghdad, Kirkuk and Salaheddin, culminating in a national conference in Baghdad in May to be attended by representatives of the youth to incorporate recommendations from these forums in the decisions that support the process of reconciliation and coexistence. As with the format for all the conferences, the participants in Najaf forum deliberated and responded to questions about what they would like to see in a future Iraq and how they can contribute, then adopted recommendations.

Adding to the significance of the latest meeting is the symbolic setting, Najaf being home to the shrine of Imam Ali and a center of Islamic scholarship.

Making her mark on the debate over Iraq’s future is exactly what attracted Sara Abdel-Hussein, who came from Babel Governorate. The medical laboratory student and activist on women empowerment issues believes she pushed her views and influenced the outcome of one of the working groups she participated in.

“In all circumstances, we have to interact with each other. The psychological part is all too important,” she told UNAMI PIO. “I encourage the participation of the youth in political activity… I even encourage running for office.”

By contrast, other participants favored recommending getting rid of political parties. There were those who espoused restoring the military draft, while one was outspoken in his opposition. These kind of diverse opinions enriched and livened the debate. One maintained that the idea of reconciliation must be instilled in the minds of people who are still not open to it, whole another believes wider representation and on the ground work would enrich the process of reconciliation and enhance the involvement of the youth.

Nizar Abdel-Rahim traveled along with 20 others from Diwaniyah in Qadissiyah to take part in the Najaf forum. “Beautiful ideas were presented,” the 23-year-old Lierature and archeology student said about the discussions. “I hope we will be able to apply it in the Iraqi street, such as working on raising awareness and combating corruption,” he said. Mr. Abdel-Rahim added his focus is on amending the election law.

Ghaith Ali Hmayd, 23, from Karbala Governorate, is hopeful this time his voice will resonate. “We have tried before but our voice has reached nowhere. The youth capabilities are gigantic but are dismissed and their opinion is not taken. Today we came, we met and we felt that our voice will be heard,” the political sciences university senior went on.

Zainab Murad, fresh graduate in English Literature from the University of Kufa, believes that the future rests with the people.

“It is through the people that sectarianism can be kept away. If the people are in agreement, no politician will be able to create a dispute,” the 23-year-old said.

A native of Najaf, Ms. Murad recalls that a few weeks ago she and a group of 10 youth from Najaf traveled to Baghdad to show solidarity by attending a church Mass, presenting the pastor with a painting of Jesus on the Cross, and visiting a center for displaced Christians.

“The people of Najaf were taken as looking inward. They (Christians) did not expect us to come to them from Najaf. They were touched by this act, and this made me happy.” 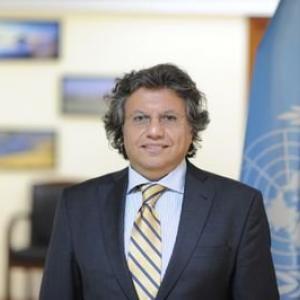