Thank you for the opportunity to provide an update on recent tragic events in Zakho District, Dohuk Governorate, resulting in the loss of nine civilian lives and injuring 33 others.

In my most recent briefing to this Council, I questioned - and not for the first time - the use of “shelling and missiles as the new normal for Iraq”, warning that this was a “very risky way to advance interests, and one which further weakens the State of Iraq”.

Well, here is what we know so far.

In the early afternoon of 20 July, five rounds of artillery struck Parkha resort. This resort is a well-known tourist destination. And as would be expected at this time of year, it was packed with visitors - including children.

The first round impacted on an unpopulated hillside overlooking Parkha. However, the next rounds hit the centre of the resort, killing - as I said - nine civilians (including three children, one of whom was a one-year-old infant) and injuring 33. Eleven of the injured have reportedly undergone surgery and three remain in critical condition.

Immediately following the attack, Prime Minister Mustafa al-Kadhimi established a committee. The same day, this committee visited the site of the attack to witness the devastation, to collect evidence and to engage with witnesses and local authorities.

Based on its assessment of the evidence collected, the Government of Iraq, in the clearest of terms, attributed the tragic events to Turkish armed forces. In the meantime, the Turkish Foreign Ministry issued a press release, stating that “Türkiye is against all kinds of attacks targeting civilians”, that it “is ready to take all steps to reveal the truth”, inviting “Iraqi government officials not to make statements under the influence of the rhetoric and propaganda of the treacherous terrorist organization and to cooperate in bringing the real perpetrators of this tragic incident into light”.

The next day, on social media, the Turkish Embassy in Baghdad stated, “we join our condolences for our Iraqi brothers who were martyred at the hands of the terrorist organization PKK”.

Meanwhile, also on 20 July, the PKK issued a statement denying presence in the area, blaming Türkiye for the attack.

In response to the tragic events, Iraq’s National Security Council held an emergency session the same day. This Council strongly condemned the “Turkish attack” and rejected the use of Iraqi territory as a base to attack neighbouring countries and “settle accounts”.

Among other directives issued, the Foreign Minister was tasked with preparing an integrated file on the “repeated Turkish attacks” against Iraq as well as to summon the Turkish Ambassador and recall the Iraqi Chargé d'Affaires from Ankara, without sending a new ambassador to Türkiye.

The Ministry of Foreign Affairs noted that Iraq’s government would “resort to the highest levels of diplomatic response”, including the UN Security Council.

On 21 July, Iraqi leaders from across the political spectrum held a high-level meeting and issued a joint statement condemning the “Turkish attack” and “supporting the procedures for international complaints”.

On 23 July, Prime Minister Mustafa al- Kadhimi met with KRG Prime Minister Masrour Barzani. In a joint statement issued after the meeting, the two sides expressed their “strong condemnation of the Turkish aggressions on Iraqi territory”.

Also on 23 July, the Council of Representatives convened to discuss the incident in the presence of the Foreign and Defence Ministers, the Army Chief of Staff as well as the Deputy Commander of Joint Operations.

In his presentation to parliament, the Foreign Minister noted that more than 22,700 Turkish violations of Iraqi sovereignty had been recorded since 2018. He also stated that the Foreign Ministry had submitted 296 memoranda of protest against Turkish “interference” since 2018.

During the same meeting, the parliamentary Security and Defence committee recommended the expulsion of PKK elements from Iraq, the withdrawal of all Turkish forces, the redeployment of federal forces along the border with Türkiye, the abolition of security agreements - if any - with Türkiye, and a review of the defence budget to enhance its military capabilities.

In essence: while no one wishes for further escalation, Iraq demands that Türkiye withdraws its forces from all Iraqi lands and calls for an investigation.

This horrific attack on a well-known and clearly identifiable tourist site demonstrates a shocking disregard for civilian life and for the universally accepted standards of international humanitarian and human rights law which seek to protect civilians. While all parties to any conflict must take all feasible precautions to avoid harm to civilians at all times, this was clearly not adhered to.

In my conversation with Iraq’s Prime Minister yesterday, he once again emphasized the importance of a transparent and thorough investigation: independent or jointly. It is vital, he said, to put a stop to speculations, denials, misunderstandings and rising tensions. Meanwhile, I do understand that Türkiye is also ready to address the issue jointly, with Iraq, in order to determine exactly what happened.

In conclusion, Mr. President, and as I have said many times in past years, Iraq rightfully rejects the notion that it can be treated as an arena for external and regional rivalries - as an arena where neighbours, and any other actor for that matter, routinely, and with impunity, violate its sovereignty and territorial integrity.

Indeed, it is of the greatest importance that all attacks on Iraqi territory cease. Such aggression not only recklessly heightens national and regional tensions but also causes, as we have seen, grave human tragedies. 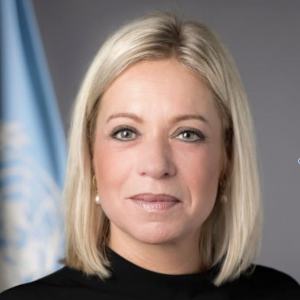