It is an honour to address you, and I would like to thank the Al-Hakim Foundation for having gathered us here today.

The 13th Islamic Day for Opposing Violence Against Women provides a timely opportunity for local and international stakeholders to reaffirm our shared commitment to the eradication of violence against women in all its forms.

With the elections, now less than one month away, I will - if you allow me - focus my remarks on electoral violence against women.

As we all know: violence against women is often most acutely felt in the home, and the COVID-19 pandemic has unfortunately amplified this phenomenon.

But we regrettably also find intimidation, aggression and violence against women in the political sphere. This is the case in too many countries and regions across the world. Also, in Iraq. The fact is that women face multiple challenges when they seek to exercise their political and electoral rights.

Gender-based violence in politics and elections ranges from, for instance, the escalation of harassment; intimidation; sexual, psychological and physical violence as well as gender-biased scrutiny by the public and the media.

While the numbers indicate a moderately encouraging level of Iraqi female participation in the October-elections, with women representing close to 30% of confirmed candidates, past and present experiences on the ground tell us that lots of work is ahead of us.

Not only to ensure the elimination of all existing barriers for women to realize their political rights, but also to achieve a better gender balance in decision-making positions. Let’s face it: very few women make it as a mayor or governor, let alone as head of state or government.

Hence, raising awareness is of great importance. And even more important: the prevention of violence against women in politics and elections.

While using the word “violence”, one often immediately thinks of the intentional use of physical force. Understandably so. But violence in fact takes many subtle forms.

Yes, certainly, all kinds of overt and explicit threats, but also implicit threats of social exclusion and rejection. All of this with the intention to degrade, demoralize or shame the woman in question. It can happen at home, in the community, in public and online.

Too often these kinds of acts are downplayed. But let it be clear: such acts deter women from considering seeking office, from voting for or against a certain candidate. And there is no denying it: threats, implicit or explicit, often precede physical or sexual violence.

Having said all this, I would also like to take this opportunity to welcome recent important steps taken by Iraqi authorities:

For instance, the Government of Iraq, through its Directorate of Women’s Empowerment, the Office of the National Security Advisor and the Independent High Electoral Commission, has taken steps to raise awareness on elections-related security, and on the procedures in place for female candidates.

Last month, the Supreme Judicial Council issued new guidance on reporting violence against women in elections: Now, women voters and candidates can directly approach judicial investigators instead of having to first go through the police.

Also, the Ministry of Interior has activated two free telephone hotlines to handle complaints from women candidates who have been exposed to any kind of harassment and violence. UN Women is training and supporting the employees who staff these hotlines.

However, much more needs to be done in order to remove the barriers to women’s full participation in political life.

This includes, inter alia, a clear commitment by all political stakeholders to promote and protect the full and equal rights of women voters, campaigners and candidates. And this also includes the nomination of more female ministers than the two out of 22 currently in office.

Now, in our recent meetings with civil society groups and women’s rights defenders, it was made clear that security concerns remain a key issue for female voters, campaigners and candidates.

I can therefore not overstate the importance of institutionalizing the work around enhancing security for women in politics and elections. And yes, of course, we strongly urge all political parties and candidates to embrace and adhere to the Elections Charter of Honour.

Ladies and gentlemen, in closing, let me emphasize: a society can never be safe unless all its citizens are safe, inside their homes as well as in the community and public sphere. If the voices of half of Iraqis are muffled, the entire representative basis of democracy will be undermined.

Let us therefore renew our commitment to the eradication of violence against women in all its forms. And let us build a political and electoral environment that welcomes and protects all, women and men alike. 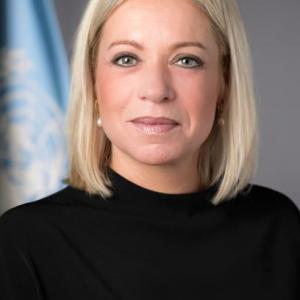